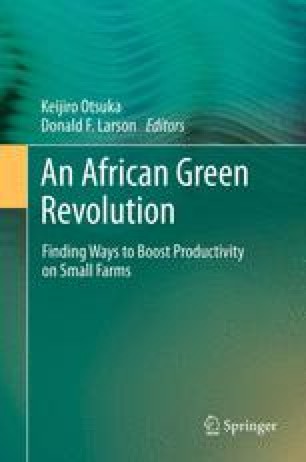 There is an urgent need to accelerate the growth in domestic rice production in West Africa to reduce its unsustainable and risky dependency on rice imports. Also important is resistance to drought and other climatic risks in rice farming in West Africa where precipitation is low and uncertain. The improved drought-resistant upland rice varieties, NERICAs, were introduced to rice farming system in Côte d’Ivoire, Guinea, Gambia and Benin from the late 1990s through participatory varietal selection trials. Farmers then started disseminating them through their informal channels. The objective of this chapter are to assess the characteristics of NERICA adopters and the potential contribution of the NERICA varieties to the improvement of land productivity in upland rice farming by applying the potential outcome framework to farm household survey data collected in the four West African countries.

Several methods have been proposed in the literatures to remove (or at least minimize) the effects of overt and hidden biases and deal with the problem of non-compliance or endogenous treatment variable in the estimation of mean causal impact using observational data (see Imbens and Wooldridge 2009,  for a review). The methods can be classified under two broad categories based on the types of assumptions they require to arrive at consistent estimators of causal effects. First, there are the methods designed to remove overt bias only and to estimate the ATE parameter. These methods that estimate the ATE parameter consistently are based on an assumption known under various names in the literature: as “ignorability”, “unconfoundedness”, “selection on observables” or conditional independence (CI) assumption (Imbens and Wooldridge 2009; Rubin 1974; Rosenbaum and Rubin 1983). The assumption postulates the existence of a set of observed covariates, which, when controlled for, renders the treatment independent of the two potential outcomes.12

Second, there are the instrumental variables (IV) methods of estimating mean causal effects that are designed to remove both overt and hidden biases (including the bias resulting from endogenous treatment) and to estimate the LATE parameter (Heckman and Vytlacil 2005; Imbens 2004; Abadie 2003; Imbens and Angrist 1994). The IV based methods assumes the existence of at least one variable z called instrumental variable that explains treatment status but is redundant in explaining the outcomes once treatment status is controlled for. In this chapter we have used farmer awareness of the existence of NERICA varieties as instrument. Indeed, the variable indicating awareness or not of the existence of NERICA is a “natural” instrument for NERICA adoption (the treatment variable). Indeed, firstly one cannot adopt a NERICA without being aware of its existence and we do observe some farmers adopting NERICA (i.e. awareness cause adoption). Second, it is natural to assume that NERICA awareness affects overall rice yield only through adoption (i.e. merely being aware of existence of NERICA without adoption does not affect the yield of a farmer). Hence, two of the three requirements for a valid instrument in classical IV models are satisfied by the NERICA awareness status variable. The third requirement for a valid instrument in classical IV models is the instrument not to be correlated with the unobserved determinants of the outcome (i.e. yield in this case). However, this third requirement of classical IV models, which in this context is essentially equivalent to assuming that that awareness of NERICA is random in the population, is not really necessary for the identification of the LATE parameter as several authors have noted (e.g. Abadie 2003; Imbens and Angrist 1994). Indeed, it suffices that instrument is independent of the unobserved determinants of the outcome conditional on some observed vector of covariates and Abadie (2003) has derived a LATE estimator based on this much weaker conditional independence assumption. Of course, the assumption that awareness of NERICA is random in the population is unrealistic in this context.13 Therefore, we have used in our analysis Abadie’s LATE estimator.

In our estimation of LATE using the Abadie (2003) estimator, we have postulated an exponential conditional mean yield response function with and without interaction to guaranty both the positivity of predicted yield and heterogeneity of the treatment effect across the subpopulation of NERICA potential adopters.

© The International Bank for Reconstruction and Development/The World Bank 2013