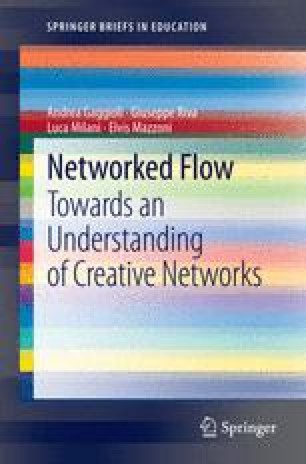 Introduction from Creativity to Creative Networks

Chapter
Part of the SpringerBriefs in Education book series (BRIEFSEDUCAT)

This chapter introduces the concept of “creative networks” as an object of study, discussing how it relates to individual and group creativity. In particular, the following questions are addressed: how do creative networks emerge? How do they evolve? Why are some creative networks more successful and productive than others? To answer these issues, we introduce a framework—“Networked Flow”—which is based on three conceptual pillars. First, we theorize that creative collaboration is enhanced when the members of the team experience high levels of social presence. In this context, we regard social presence as a process that leads the group to develop a “we-intention”, in which actions of the individuals and those of the collective are in balance, and a sense of mutual trust, sharing, and empathy is established. Further, we argue that when such optimal collective experience is reached, group-level emotions are shared and embodied in novel and useful ideas, which are able to produce a long-term change relevant both for the team and for the individual members. Second, we describe the development of creative networks as a staged process, which begins with the co-construction of a shared frame and culminates with the creation of a novel artifact or concept. In our view, the relationship between the process (group collaboration) and the product (the emergence of a novel artifact or idea) is a bi-directional one; the creative product affects the structure of the frame, which in turns affects the unfolding of meaning. Similar to stigmergic interaction, in which agents coordinate actions by making and sensing changes to a shared environment, the creative product provides an extra-somatic memory of group interactions and emotions, which ultimately shapes the complex dynamics of team interaction. Third, we speculate that the emergence of optimal group experience is associated with structural changes in group dynamics, which can be effectively investigated using social network analysis techniques. The article is organized as follows. The first part provides a thorough analysis of the key theoretical concepts and terms. In the second section, the Networked Flow model is summarized in its cognitive, psychological, and methodological components, which will be further discussed throughout this book.