The Heart of the Good Institution 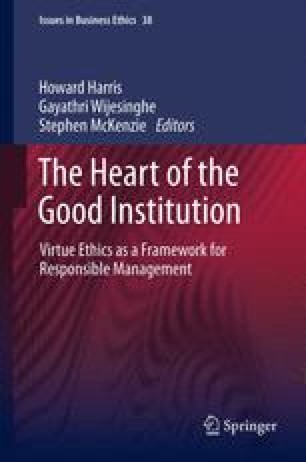 Management as a Practice

Modern society depends for most purposes on managed organisations. The character of the managers and the value commitments of the organisations have profound implications for the moral and material development of society. Virtue ethics emphasise the development of moral character through the pursuit of excellence in a practice. Virtue ethics provide guidelines for managers and boards who seek integrity and excellence in the institutions that they govern. This chapter reviews examples of management best practice, from the literature and from exemplary businesses, and assesses them against the definition and characteristics of a practice advanced by Alasdair MacIntyre (After virtue, Duckworth, London, 1985, 187). The review suggests that management, when exercising virtue and pursuing excellence, might achieve MacIntyre’s criteria for a practice, on occasion. In order to contribute to the moral development of society, institutions would need to commit to the development of the moral character of their people as a primary goal, and management would need to commit to excellence in those central practices of the institution which deliver the mission and so sustain the integrity of the institution.

Ethical Leadership Virtue Ethic Moral Character Quality Work Internal Good
These keywords were added by machine and not by the authors. This process is experimental and the keywords may be updated as the learning algorithm improves.
This is a preview of subscription content, log in to check access.