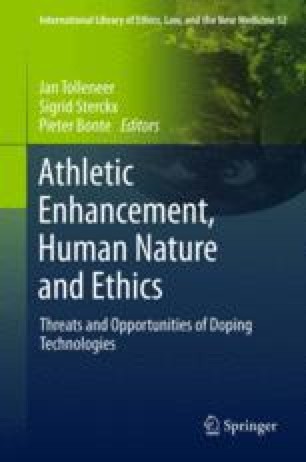 Prometheus on Dope: A Natural Aim for Improvement or a Hubristic Drive to Mastery?

The complexity of the current debate on athletic enhancement has resulted in the generation of a number of contradictory images of the athlete. Advocates of (performance) enhancement depict the athlete as a creative and courageous figure striving for improvement, whereas opponents present a picture of an overly ambitious being determined to challenge human limitations. In this chapter I present arguments from both camps with the aim to analyse and contrast these antithetical images. Within both these positions, the image of the Greek god Prometheus often plays a meaningful role in crucial arguments, and analysing its use in these arguments facilitates the examination of the portrayals of the athlete. I propose that these different depictions depend in large part on two contrasting, ethically charged, concepts of human nature. By critically examining the use of these concepts by the advocates and opponents of enhancement, significant insight into the priorities of each position may be revealed. Moreover, it uncovers the conflicting demands upon the athlete within the current practice of sport, since contrasting concepts of human nature underlie these different demands: while he is expected to break world records and produce superhuman performances, he also has to remain within the ‘natural’ boundaries of his human body.

Human Nature Performance Enhancement Normative Judgement Moral Imperative Human Enhancement
These keywords were added by machine and not by the authors. This process is experimental and the keywords may be updated as the learning algorithm improves.
This is a preview of subscription content, log in to check access.