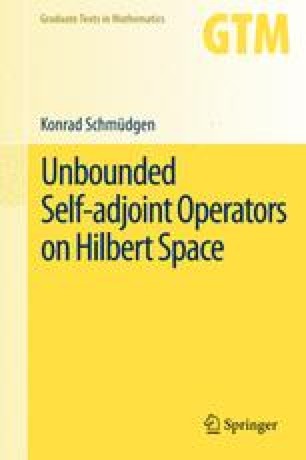 Chapter 14 is devoted to a powerful approach to the self-adjoint extension theory. It is based on the notion of a boundary triplet for the adjoint of a densely defined symmetric operator T with equal deficiency indices. It is shown that (self-adjoint) extensions of the operator T can be parameterized in terms of (self-adjoint) relations on the boundary space. In a separate section, we therefore develop some basics of linear relations on Hilbert spaces. We construct three operator-theoretic examples of boundary triplets and some examples for the differentiation operators \(-\mathrm {i}\frac{d}{dx}\) and \(-\frac{d^{2}}{dx^{2}}\). Next, gamma fields and Weyl functions are defined and investigated as important technical tools of the theory of boundary triplets. A central result of this chapter is the Krein–Naimark resolvent formula. We derive two versions of this formula, one within the theory of boundary triplets using gamma fields and Weyl functions and another one in purely operator-theoretic terms. The remaining part of this chapter is concerned with semibounded or positive self-adjoint extensions. We prove a general theorem, due to M. Malamud, on such extensions in the context of boundary triplets. Applying this result to one of our operator-theoretic examples, we derive the basic results of the Krein–Birman–Vishik theory of positive self-adjoint extensions of a densely defined symmetric operator with positive lower bound. Finally, this theory is illustrated by several examples of differential operators.

Boundary Triplet Positive Self-adjoint Extension Weyl Function Gamma Field Equal Deficiency Indices
These keywords were added by machine and not by the authors. This process is experimental and the keywords may be updated as the learning algorithm improves.
This is a preview of subscription content, log in to check access.