Economic and Political Change in Asia and Europe 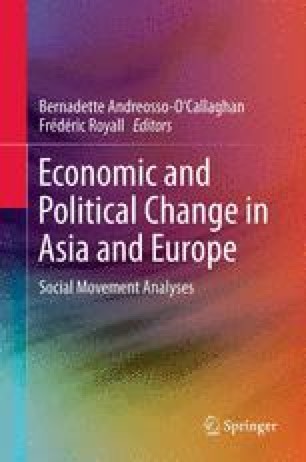 The Suicide Problem in Contemporary Japanese Society: Its Economic and Social Backdrop and Religious Reactions

The deregulation of employment conditions in Japan in the 1990s has caused instability in the labor market, forcing certain people to choose between overwork and poverty. Both overwork and poverty can drive fragile people to commit suicide, and thus over 30,000 people have killed themselves annually since 1998. For a number of years, the Japanese government has not focused seriously on issues such as poverty and suicide. However, the historic transfer of power in 2009 from the Liberal Democratic Party to the Democratic Party of Japan has changed the situation, and these issues are now well placed on the political agenda. Furthermore, Japan experienced a catastrophic earthquake and tsunami and a subsequent devastation of the Fukushima 1 Nuclear Power Plant in 2011 which will more than likely exert enormous influence on the Japanese society and economy in the coming years. Given these situations, it is expected that religious people and organizations in Japan will be at the forefront of responses to the social crises and especially to the issue of suicide. This chapter reviews the economic and social backdrop to the issue of suicide in Japan and the challenges that Japanese religious face in response to same.

Liberal Democratic Party Religious People Female Suicide Male Suicide Telephone Helpline
These keywords were added by machine and not by the authors. This process is experimental and the keywords may be updated as the learning algorithm improves.
This is a preview of subscription content, log in to check access.

Cite this chapter as:
Okuyama M. (2013) The Suicide Problem in Contemporary Japanese Society: Its Economic and Social Backdrop and Religious Reactions. In: Andreosso-O'Callaghan B., Royall F. (eds) Economic and Political Change in Asia and Europe. Springer, Dordrecht. https://doi.org/10.1007/978-94-007-4653-4_14