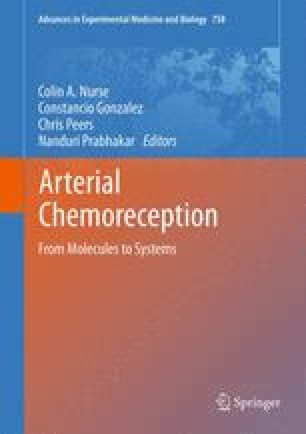 The Interaction Between Low Glucose and Hypoxia in the in vitro, Rat Carotid Body

A role for the carotid body (CB) in systemic glycaemic control is yet to be fully characterised. Observations made on fasted, anaesthetised cats, rats and dogs in vivo showed that intra-arterial injection of sodium cyanide into the carotid sinus region immediately increased carotid sinus nerve (CSN) discharge frequency and elicited a subsequent significant increase in the systemic arterial glucose concentration, within 2–8 min of drug administration (Alvarez-Buylla and Alvarez-Buylla 1988). These responses were abolished in animals in which both CSNs had been surgically sectioned, demonstrating that the increased arterial glucose concentration detected following CB stimulation was dependent on CSN input into the NTS. Although not directly tested by these authors, it was proposed that low plasma glucose directly stimulated the CB, as the increase in CSN discharge frequency elicited with NaCN was attenuated by direct injection of a hyperglycaemic solution into the common carotid artery (Alvarez-Buylla and Alvarez-Buylla 1988; Alvarez-Buylla et al. 1997). Additionally, in dogs with bilateral CB resection (CBR), the rate of exogenous glucose infusion required to maintain a fixed hypoglycaemic level was significantly higher, whilst the endogenous hepatic glucose production was significantly lower, compared to control (CSN intact) animals (Koyama et al. 2000). These results further suggested a dependence on CB stimulation for the maintenance of a physiologically normal plasma glucose concentration, but again no direct measure of CB response to hypoglycaemia had been made.

APSH was supported by an A.E. Hills Scholarship and an Alumni Scholarship from the University of Birmingham