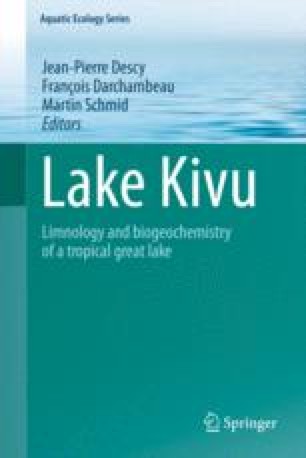 Lake Kivu: Past and Present

Lake Kivu, located in the Eastern African Rift, in a dramatic volcanic scenery, has fascinated the local people, inspiring legends; the explorers of the nineteenth century, inspiring romantic reports; and the scientists of the twentieth and twenty-first centuries, inspiring limnological and geochemical research. For some, Lake Kivu is a “killer lake”, containing vast amounts of carbon dioxide and methane in its deep, anoxic waters, and it has been compared to Lakes Nyos and Monoun, whose eruptions caused massive animal and human death in Cameroon. Fortunately, methane gas exploitation can help to reduce the eruption risk and at the same time supply an important amount of energy for the benefit of local development. However, the management of the lake resources, including methane harvesting and fisheries, is complex, and particular care must be taken during gas exploitation in order to avoid any negative impacts on the ecosystem and the goods and services provided by the lake.

In this chapter, the history of research on Lake Kivu is summarized, and the major findings that resulted from expeditions by British, Belgian, American, and German researchers are presented.

Deep Water Lake Breeze Pilot Power African Great Lake East African Lake
These keywords were added by machine and not by the authors. This process is experimental and the keywords may be updated as the learning algorithm improves.
This is a preview of subscription content, log in to check access.

The story began earlier, with an encounter of one of us (JPD) with George Hanek on the shore of Lake Ihéma, back to 1989. George was at that time director of the FAO “Isambaza” project, and took interest in the studies by Rose Mukankomeje, PhD student at University of Namur, who attempted to relate primary production with fish production in Lake Muhazi. George Hanek suspected that similar relations could explain the large seasonal variations of fisheries yield in Lake Kivu, evidenced by Michel Lamboeuf. However, it was only more than 10 years later, through a long-term collaboration between ISP-Bukavu and University of Namur, that projects centred on the lake ecology developed. In particular, the UERHA (“Unité d’Enseignement et de Recherches en Hydrobiologie Appliquée”) of ISP, led by Prof. Boniface Kaningini Mwenyimali, played a key role, with the objective of establishing a long-term program of limnological research, chiefly on Lake Kivu. In that framework, several cooperation and research projects were initiated, in which African and European scientists and students became involved. Financing came first from University of Namur, then from CUD (“Commission Universitaire pour le Développement”, Belgium), from FRS-FNRS (“Fonds de la Recherche Scientifique”, Belgium), and the local partnership was extended to NUR (National University of Rwanda at Butare), with Canisius Kanangire, Jean-Bosco Gashagaza and Laetitia Nyina-wamwiza as successive leaders. Financing also came from the Belgian Federal Science Policy Office through the EAGLES (East African Great Lake Ecosystem Sensitivity to changes, SD/AR/02A) project. Mission grants were awarded to several Belgian students by CUD, the “Fonds Léopold III”, and the “Fonds pour Favoriser la Recherche en Afrique”. Eawag became involved in research on Lake Kivu with an emergency expedition following the eruption of Nyiragongo in 2002, financed by EC-ECHO. Further financial support came from Eawag, UN-OCHA, and the Research Partnership project “Nutrient cycling and methane production in Lake Kivu” (207021-109710) funded by the Swiss National Science Foundation (SNSF) and the Swiss Agency for Development and Cooperation (SDC). The research of Eawag on Lake Kivu was only possible thanks to the dedicated scientific and administrative support of Alfred Wüest and the involvement of Bernhard Wehrli, Beat Müller, Helmut Bürgmann, Flavio Anselmetti, Mike Sturm and Carsten Schubert, as well as the local administrative support by Augusta Umutoni and Charles Nyirahuku. The research carried out in the Belgian universities benefited from the assistance of several people, as Philippe Leroy and Yves Mine.

We are grateful to the funding institutions and to their representatives, including the persons involved in the administrations and in the evaluation committees, for their support.