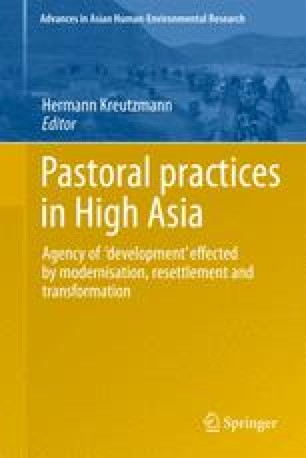 Pastoralism: A Way Forward or Back?

Perceptions and experiences differ widely in the world of pastoralism. The case studies presented in this volume provide fieldwork-based insights and evidence from a widespread area between the Pamirs, Tien Shan, Hindukush, Karakoram, Himalaya and the Tibetan Plateau. More important than the ecological breadth and spread of environmental properties and changes seem to be the societal embeddedness of pastoralism, the politico-economic framework and the understanding of ‘modernisation’. The debate on the ‘tragedy of the commons’ seems to have developed through a supposed ‘drama of the commons’ to an institutional ‘tragedy of responsibility’ under similar pretexts as in the early stages. Norms and viewpoints govern judgements about actors and victims in relation to their pastoral practices.

Pastoral embeddedness Future of pastoralism Payment for ecosystem services Tragedy of responsibility Norms and values
This is a preview of subscription content, log in to check access.

Insights presented in this chapter were collected during the last 28 years in several research projects that received generous funding provided by the Deutsche Forschungsgemeinschaft (DFG) and the Volkswagen Foundation; their support is gratefully acknowledged. In recent years, InWEnt – Capacity Building International (renamed in Deutsche Gesellschaft fuer Internationale Zusammenarbeit (GIZ) GmbH in 2011) – and the International Centre for Integrated Mountain Development (ICIMOD) have put more emphasis on pastoralism and rangeland management. Their timely efforts have initiated a number of conferences, stimulated the debate and produced a number of valuable publications in the field of pastoralism from which this chapter could make ample use.

1.The explanation of causes and effects is surprisingly weak as Harris (2010, 8) observed for the Qinghai-Tibetan Plateau: ‘… there has been very little rigorous Chinese research into the reasons for overgrazing and rangeland degradation. Most Chinese biological research has not asked, much less answered, questions regarding human motivations among the pastoralists using the rangelands…’.

2.This information on recent policies in the Hindukush-Karakoram-Himalaya was derived from the presentations of country papers during the ICIMOD workshop on ‘Regional Rangeland Management Programme (RRMP). Development and policy review for the Hindukush-Himalayas’ held in Kathmandu August 22–23, 2011. I am indebted to Imtiaz Ahmad (Pakistan), Ruchi Badola (India), Shikui Dong (China), Tsering Gyeltshen (Bhutan), M. Arif Hossini (Afghanistan) and Devendra Kumar Yadav (Nepal) for sharing their insights during the workshop. For Kyrgyzstan and Tajikistan, evidence was presented by Ermek Baibagushev (2011), Bernd Steimann (2011), Andrei Dörre and Tobias Kraudzun (cf.  Chaps. 5 and  7 in this volume).

3.Both conferences were organised by InWEnt – Capacity Building International (renamed in Deutsche Gesellschaft fuer Internationale Zusammenarbeit (GIZ) GmbH in 2011), aiming to bring together academics, decision-makers and development practitioners. The proceedings were published by Kreutzmann et al. (2011a, b).