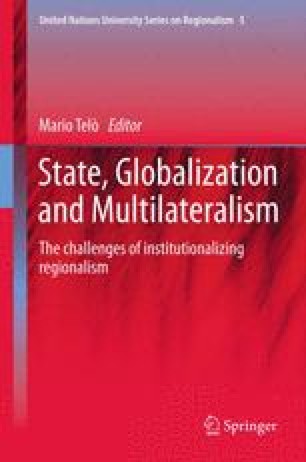 The decade following the historical turning point of 1989/1991 has been characterized by a marginalization of the analysis of the role of the state and political power within a decentralizing, democratized, multilevel global governance; on the opposite, the following decade, the first of the new century, started with September 11, with the sudden ‘securitization’ of the global agenda, and was concluded by the worst backlash of liberal economy after 1929, with the consequences of an unexpected and assertive coming back of the state in the centre of the research agenda, as well as of a revival of the realist thought and a controversial literature on multilateral cooperation.

Research Agenda Global Governance Regional Cooperation Comparative Politics Seventh Framework Programme
These keywords were added by machine and not by the authors. This process is experimental and the keywords may be updated as the learning algorithm improves.
This is a preview of subscription content, log in to check access.