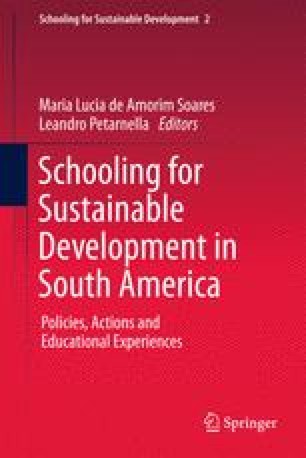 School Culture in Brazil: Complexities in the Construction of the Sustainability Concept

When the Portuguese people arrived in Brazil in the sixteenth century economically supported by “Ordem de Cristo”, a Portuguese organisation that helped the navigators, education was seen as a problem not as a solution. At first the religious ­missions tried to ‘save the people’, which meant the Indians, destroying the culture of those people living in the forests who knew how to teach for their survival in harmony with nature. The missions were to cause eugenic and ethnic changes and from then on the indigenous people were at the mercy of political interests exercising power in a centralised civil dictatorship. Currently, with no aims for national integration or making provision for gaining professional qualifications, education has become a tool for socialisation, unable to create the identification of students with the places where they live and, affecting in this way, the environment. The Brazilian school system continues in the twenty-first century to be aimless, while social projects have been introduced that are better welcomed by the population.

Elementary School Private School Civic Education Sustainability Concept Private High School
These keywords were added by machine and not by the authors. This process is experimental and the keywords may be updated as the learning algorithm improves.
This is a preview of subscription content, log in to check access.