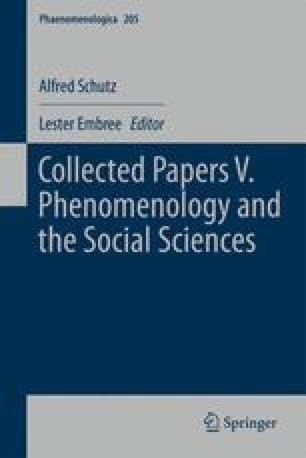 This essay was supposed to be included in CP II but unaccountably omitted. It contains unique and substantial clarifications of the concepts of social class and culture, concepts curiously not focused upon so extensively elsewhere in the oeuvre. There are also indications that Schutz had been studying cultural anthropology. He regarded Eliot highly as a poet but not as a social theorist.

Conceptual Scheme Northwest Coast Sociological Method Unconscious Level Bourgeois Society
These keywords were added by machine and not by the authors. This process is experimental and the keywords may be updated as the learning algorithm improves.

On April 12, 1950, Alfred Schutz (1899–1959) spoke under the above title in General Seminar of the Graduate Faculty of Political and Social Science of the New School for Social Research in New York City. He was initially hesitant to publish his lecture then and his widow subsequently chose not to do so in the decade after his death. At this time, it can be published for the sake of adequacy of the comprehension of his thought and in line with his recently learned final intentions. LEE