Socio-scientific Issues in the Classroom 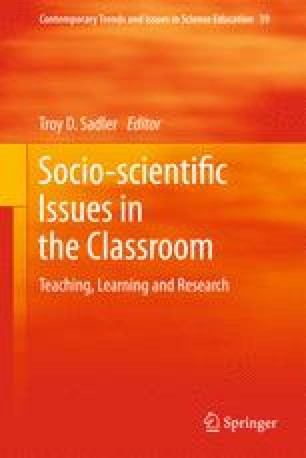 Socio-scientific Issues in the Classroom pp 11-38 | Cite as

In this chapter, we view socio-scientific issues (SSI) as contributing to dialogic argumentation (Ash & Wells, 2006; Driver, Newton, & Osborne, 2000; Tal & Kedmi, 2006) and as enhancing the ability to assess scientific information and data (Jiménez-Aleixandre, Rodríguez, & Duschl, 2000; Zohar & Nemet, 2002), which both contribute to scientific literacy of students in middle and lower high school grades (Roth & Calabrese Barton, 2004). Teaching science through socioscientific issues is in line with ideas brought up by the Science-Technology-Society (STS) movement (Aikenhead, 1994; Hodson, 1994, 1998) that continued to develop into ideas about humanistic science teaching and teaching citizen science (Aikenhead, 2005; Calabrese Barton, 2003; Roth & Calabrese Barton, 2004; Tal & Kedmi, 2006). The essence of all these ideas is that the science content should be situated in real, important, and often controversial issues that gain the public’s interest. Ratcliffe and Grace (2003) identified the following characteristics in socioscientific issues: they have a basis in science as they are frequently at the frontiers of scientific knowledge; they involve forming opinions, making choices at personal and societal levels; they are frequently reported by media; they deal with incomplete information; they address local, national, and global dimensions; they involve some cost-benefit analysis in which risk interacts with values; they may involve considerations of sustainable development; they involve values and ethical reasoning; they may require some understanding of probability and risk; they are frequently topical with transient life (pp. 2–3).

Cystic Fibrosis Cystic Fibrosis Patient Field Trip Online Interaction Socioscientific Issue
These keywords were added by machine and not by the authors. This process is experimental and the keywords may be updated as the learning algorithm improves.
This is a preview of subscription content, log in to check access.

1a.Sarah and Michael are going to have a baby. Both of them are completely healthy, but they know that Sarah’s dad (the baby’s grandfather) has a genetic disease called cystic fibrosis, which affects the lungs. Should they be worried about their child being born with cystic fibrosis?

1b.List two pieces of information you need in order to accurately predict the chances that Sarah and Michael will have a child with cystic fibrosis?

2.There are two main phenotypes (physical appearance) for the trait for hairline, which is a genetically inherited characteristic:

Look at the family tree below; is it possible for two parents with widow’s peaks to have a child with a straight hairline? Explain why or why not.

3a.Some humans have a trait (characteristic) for curling their tongues. You observe that a mother and father can curl their tongues, but their child cannot. Which of the traits below is the dominant trait?

Please explain how you determined this.

3b.What is the probability that these parents will have a child that will have the tongue-curling ability?

Explain how you got your answer.

In the SI module you got to know a few CF patients. According to the information that X gave, he is the only person in his large family known to have CF. Today, in Israel, in most families of CF patients no one knows about sick relatives in previous generations. Can you suggest a reason for that?

Did the visit to the CF unit at the hospital, meeting with the patient and the staff contributed to your learning of genetics in addition to the SI module?