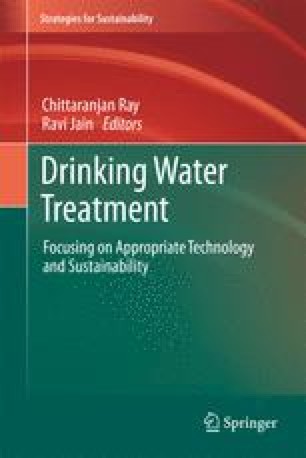 Chapter
Part of the Strategies for Sustainability book series (STSU)

“Solar distillation” is a technology for producing potable water from brackish and underground water of low-quality at low cost. It can reduce water-scarcity problems together with other water purification technologies. Solar distillation is analogous to natural hydrological cycle. It uses an apparatus called a solar still in which water is evaporated using solar energy, a form of renewable energy, and collected as distillate after condensation of the vapor. It effectively produces distilled water after removal of impurities. The major advantage of this is the use of solar energy instead of electrical energy generated from conventional fuels. This helps in producing potable water without degrading our environment. Over time, researchers have studied several designs of solar stills to evaluate its performance for different climatic, operational, and design parameters. In this chapter, many aspects of this technology are being covered. Among those, the working principle explains the production of distilled water through evaporation and condensation process inside the solar still, including its advantages and drawbacks. The evolution of the solar still is discussed under the historical background section and classified as passive or active solar stills. Various heat gains and losses and a methodology to develop a thermal model to predict the solar still performance are presented. Thereafter, the effects of various parameters, economic, energy-exergy analysis including carbon credit, and technology transfer with challenges in adoption are given. In conclusion, the probable extensive use of this technology to solve water problems on a large scale all over the world is presented.