Fractional Calculus for Scientists and Engineers 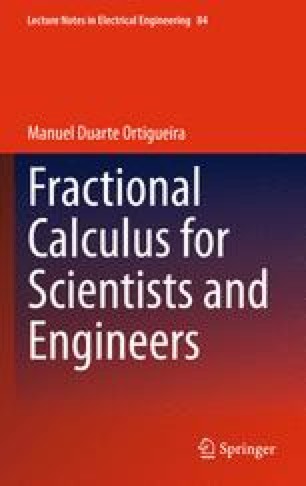 Fractional Calculus for Scientists and Engineers pp 1-3 | Cite as

A Travel Through the World of Fractional Calculus

I heard the designation “fractional derivative” for the first time in the 1980s. My curiosity was excited and I decided that later I would learn something about the subject. This only happened in 1994 when I decided to talk with Prof. Costa Campos. He lent me some books and some of his papers. I read them and I was very troubled, because there were several incompatible definitions and also incompatible with the theory of linear systems I knew. So, I decided to look for the derivative definition that had suitable properties for generalising to fractional orders the linear system concept and their usual characterizations namely the transfer function and impulse response. To do it, I decided to start from the Laplace transform domain and arrived to the Liouville derivative. With it I could introduce formally the fractional linear systems. I published the corresponding paper in 2000 and the main results are presented in  Chap. 2. Meanwhile, I was far from the fractional community and the Fractional Calculus (FC) was a mere hobby. One day a colleague informed that there was at Porto another “crazy” person that worked also in FC: Prof. Tenreiro Machado. He is almost permanently involved in organization of conferences and challenged me to send papers. One of them treated the initial condition problem. Most people were using the Riemann–Liouville (RL) or Caputo (C) derivatives and indentified their “initial conditions” with those of the system. I disagreed and proposed an alternative that is also in  Chap. 4. Meanwhile I received the visit of Blas Vinagre that showed be some of the current applications and talked also with Stephen Samko. The initial condition problem was not the unique reason why I refused to accept the RL and C formulations as correct derivative definitions. I did not accept the two-step procedure involved if their computations. It was like desiring to go from Lisbon to New York and instead of a flight Lisbon/New York did two flights as Lisbon/Paris and Paris/New York. Of course and by the same reasons I reject the sequential Miller-Ross derivative and also the Marchaud derivative. I use to say that I work under the minimum energy principle.

Fractional Order Fractional Calculus Fractional Brownian Motion Liouville Derivative Initial Condition Problem
These keywords were added by machine and not by the authors. This process is experimental and the keywords may be updated as the learning algorithm improves.
This is a preview of subscription content, log in to check access.