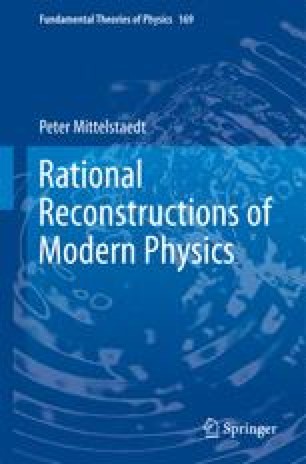 In accordance with the results of the preceding Chaps. 2 and 3, we assume that the two fundamental theories of modern physics, the Theory of Relativity (SR) and Quantum Mechanics (QM) can be obtained from the classical space–time theory and classical mechanics (CM) by abandoning or relaxing hypothetical assumptions contained in these classical structures. In addition, it became also obvious in the preceding chapters, that classical mechanics and Newton’s space-time theory describe a fictitious world that does not exist in reality. Hence, we do not expect to find in modern physics any indications that refer to classical mechanics and to Newton’s space-time. Possible traces of absolute time and absolute space are equally eliminated in Special and General Relativity as the classical limit in Quantum Mechanics. In modern physics we can completely forget about the pretended classical roots. In Quantum Mechanics as well as in Relativity there is no need and no room for anything like a correspondence principle or a non-relativistic limit, respectively.