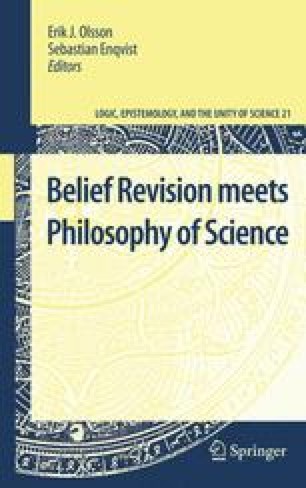 Chapter
Part of the Logic, Epistemology, and the Unity of Science book series (LEUS, volume 21)

Global Warming Belief Revision Belief Change Coherence Relation Negative Constraint
These keywords were added by machine and not by the authors. This process is experimental and the keywords may be updated as the learning algorithm improves.
This is a preview of subscription content, log in to check access.

Input to the ECHO simulation of the acceptance of the claim that global warming is caused by humans.

E2. The rate of warming is rapidly increasing.

E3. The recent warming is more extreme than any other warming period as far back as the record shows to 1000 AD.

E4. Arctic ice is rapidly melting and glaciers around the world are retreating.

GF2. Greenhouse gasses absorb infrared radiation, some of which is reemitted back to the Earth’s surface.

GF3. Carbon dioxide levels in the atmosphere have been increasing since the beginning of the industrial revolution.

GH1. There is a greenhouse effect that warms the planet.

GH2. The greenhouse effect has the potential to be enhanced.

GH4. Increasing the concentration of greenhouse gasses in the atmosphere directly increases the warming of the Earth.

GH5. Small changes in global temperature have the potential to drastically upset a variety of climate systems through causal interactions.

NH1. Long term cycling of Earth’s orbital parameters, solar activity and volcanism and associated aerosols are natural causes that can warm the globe.

NH3. Climate systems will be affected by natural cycles and fluctuations.

NH4. Global warming is natural and not a concern.

SH1. Small changes in temperature will not have significant negative effects on global climate.

of the enhanced greenhouse effect and anthropogenic forcing.

of a natural cause for global warming: