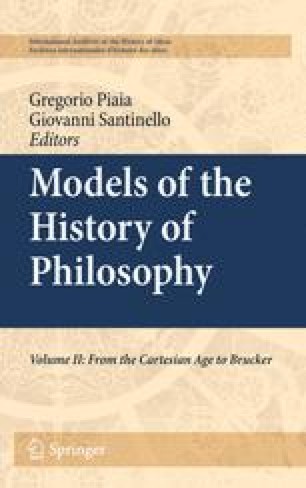 Text Books on the History of Philosophy from Heumann to Brucker

From a historiographical point of view, the period from 1720 to 1750 is characterized by the writings of Brucker, whose works start with the Historia philosophica doctrinae de ideis (1723), followed by such large-scale works as the Kurtze Fragen aus der philosophischen Historie (1731–1736, 9 Vols.) and the Historia critica philosophiae (1742–1744, 5 Vols.). In parallel to these truly impressive books various textbooks of philosophy appeared, compiled with more modest intentions; in these, historiographical research gave up any claim to erudition and adapted itself to didactic requirements, to serve as a means of orientation and study for students attending university courses in philosophy.

Moral Philosophy Modern Philosophy Greek Philosophy Early Eighteenth Century Philosophical Method
These keywords were added by machine and not by the authors. This process is experimental and the keywords may be updated as the learning algorithm improves.
This is a preview of subscription content, log in to check access.