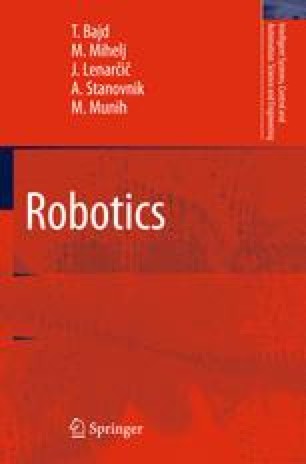 Kinematics is part of mechanics studying motion without considering the forces which are responsible for this motion. Motion is in general described by trajectories, velocities and accelerations. In robotics we are mainly interested in trajectories and velocities, as both can be measured by the joint sensors. In the robot joints, the trajectories are measured either as the angle in a rotational joint or as the distance in a translational joint. The joint variables are also called internal coordinates. When planning and programming a robot task the trajectory of the robot end-point is of utmost importance. Position and orientation of the end-effector is described by external coordinates. Computation of external variables from the internal and vice versa is the central problem of robot kinematics.

Joint Angle Inverse Kinematic Joint Torque Rotational Joint Joint Trajectory
These keywords were added by machine and not by the authors. This process is experimental and the keywords may be updated as the learning algorithm improves.
This is a preview of subscription content, log in to check access.