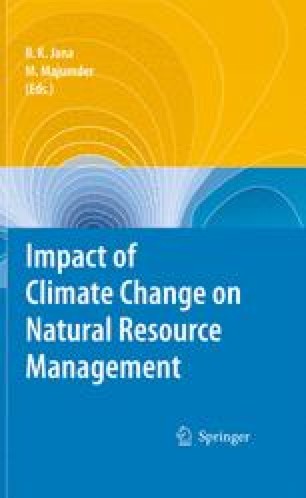 The present study tried to identify water-stressed regions of two river basins of East India. Availability of water was calculated with the help of UNFCC-recommended equation, which use rainfall, evapotranspiration, and basin loss. The result from the calculation was fed to Falkenmar- and Pastor -prescribed conditions for water stress, which propose that a region with less than 1,000 m3/capita/year water availability would be under stress for water. One of the major reasons for faulty hydrologic models could be attributed to the area dependency of hydrologic parameter. For example, when river runoff is estimated from a lumped and distributed model the predicted result would be different. When precipitation is converted to runoff, a portion of the rainfall volume is lost due to evaporation, transmission, and infiltration. A lumped model does not consider loss incurred by sub-basins of a river basin, whereas the distributed model predicts runoff from a river basin considering the influence of each of the sub-basin. But even distributed models yield erroneous results when they consider the influence of gauged catchment and ignore the un-gauged one. A continuously distributed hydrologic model considers the influence of both gauged and un-gauged sub-basins of a river and for that model also there would be noticeable amount of error though it would be less than that of the distributed hydrologic models. A distributed or continuously distributed hydrologic model requires a lot of parameters and constants to imitate the hydrologic processes involved in generation of river runoff. Such models are often tedious and time-consuming to develop and also need a lot of computational energy to perform each estimation. Representative elementary area (REA) is an area where change in basin area has no impact on change in basin runoff. If a relationship can be estimated with runoff and area of sub-basins, runoff of entire river basin and REA, a more accurate prediction of river runoff can be made. The present study tried to estimate river runoff with the help of REA where the interrelationship between runoff and area of sub-basin was estimated by neurogenetic models because of their ability to identify patterns more efficiently than the conceptual hydrologic models. The models developed in such a way were compared with a distributed and continuously distributed hydrologic model along with NGHYD (Chapter 4) neurogenetic model. The result of comparison can reveal the validity of the REA concept. The selected model was also used to estimate river runoff from which water-stressed regions of the two river basins considered for the present study was identified. According to the results, REA model was found to be a better model among the five models used in the present study according to the performance validation criteria, like root mean square error, correlation coefficient, coefficient of efficiency, and first-order uncertainty analysis. According to the model estimations, the northeast region of the two river basins would be under water stress in face of the future climatic uncertainty.