Innovations as Key to the Green Revolution in Africa 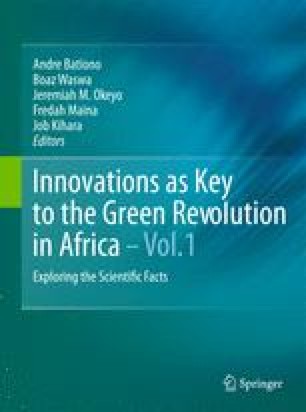 Micro-dosing as a pathway to Africa’s Green Revolution: evidence from broad-scale on-farm trials

Next to drought, poor soil fertility is the single biggest cause of hunger in Africa. ICRISATZimbabwe has been working for the past 10 years to encourage small-scale farmers to increase inorganic fertiliser use as the first step towards Africa’s own Green Revolution. The program of work is founded on promoting small quantities of inorganic nitrogen (N) fertiliser (micro-dosing) in drought-prone cropping regions. Results from initial on-farm trials showed that smallholder farmers could increase their yields by 30–100% through application of micro doses, as little as 10 kg Nitrogen ha-1. The question remained whether these results could be replicated across much larger numbers of farmers. Wide scale testing of the micro-dosing (17 kg Nitrogen ha-1) concept was initiated in 2003/2004, across multiple locations in southern Zimbabwe through relief and recovery programs. Each year more than 160,000 low resourced households received at least 25 kg of nitrogen fertiliser and a simple flyer in the vernacular explaining how to apply the fertiliser to a cereal crop. This distribution was accompanied by a series of simple paired plot demonstration with or without fertiliser, hosted by farmers selected by the community, where trainings were carried out and detailed labour and crop records were kept. Over a 3 year period more than 2,000 paired-plot trials were established and quality data collected from more than 1,200. In addition, experimentation to derive N response curves of maize (Zea mays L.), sorghum (Sorghum bicolor (L.) Moench) and pearl millet (Pennisetum glaucum (L.) R.Br.) in these environments under farmer management was conducted. The results consistently showed that micro-dosing (17 kg Nitrogen ha-1) with nitrogen fertiliser can increase grain yields by 30–50% across a broad spectrum of soil, farmer management and seasonal climate conditions. In order for a household to make a profit, farmers needed to obtain between 4 and 7 kg of grain for every kg of N applied depending on season. In fact farmers commonly obtained 15–45 kg of grain per kg of N input. The result provides strong evidence that lack of N, rather than lack of rainfall, is the primary constraint to cereal crop yields and that micro-dosing has the potential for broad-scale impact on improving food security in these drought prone regions.