An Introduction to Dynamical Systems and Chaos 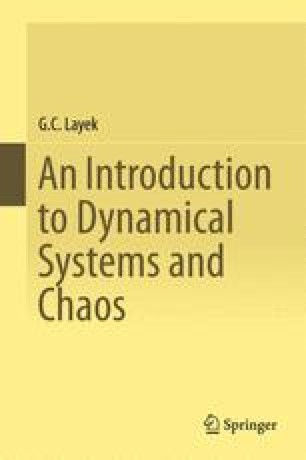 Stability of solutions is an important qualitative property in linear as well as nonlinear systems. The objective of this chapter is to introduce various methods for analyzing stability of a system. In fact, stability of a system plays a crucial role in the dynamics of the system. In the context of differential equations rigorous mathematical definitions are often too restrictive in analyzing the stability of solutions. Different kinds of methods on stability were developed in the theory of differential equations. We begin with the stability analysis of linear systems. Stability theory originates from the classical mechanics, the laws of statics and dynamics. The ideas in mechanics had been enriched by many mathematicians and physicists like Evangelista Torricelli (1608–1647), Christiaan Huygens (1629–1695), Joseph-Louis Lagrange (1736–1813), Henri Poincaré (1854–1912), and others. In the beginning of the twentieth century the principles of stability in mechanics were generalized by the Russian mathematician A.M. Lyapunov (1857–1918). There are many stability theories in the literature but we discuss a few of them in this chapter which are practically the most useful.

Equilibrium Point Phase Portrait Invariant Manifold Unstable Manifold Russian Mathematician
These keywords were added by machine and not by the authors. This process is experimental and the keywords may be updated as the learning algorithm improves.
This is a preview of subscription content, log in to check access.