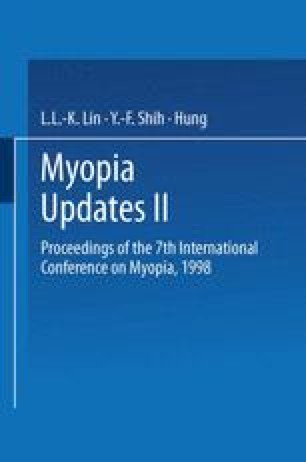 Myopic progression among 240 myopic schoolchildren was annually followed for a 3-year period as a part of a clinical trial of myopia treatment. Schoolchildren from third and fifth grades of lower comprehensive school with no previously prescribed spectacles for myopia were considered for inclusion in the study. Children were randomly allocated to one of the three treatment groups: full corrected spectacles to be used 1) continuously 2) only for distant vision, 3) bifocals with +1.75D add. Ten years later 179 subjects, 81 men and 98 women (75%) were re-examined. The mean age of children at the beginning of the study was 10.9 years, and 23.7 years at the last examination. The mean refraction at the beginning of the study, −1.46 D increased during the three-year follow-up to −3.13 D and 10 years later to − 4.66 D. There were no significant differences in the myopic progression between the treatment groups during the 3-year follow-up. The amount of accommodation stimulus did not have any direct relationship to myopic progression. The factors which were related to myopia and to its progression during the first 3 years were: sex, age of myopia onset, time spent on reading and close work, reading distance and time spent on outdoor activities. Adult myopia was higher among females (5.01D) than among males (4.43D). Higher education was related to the higher myopia, but not among those whose myopia began at third grade.