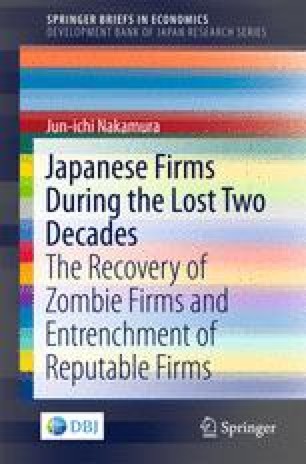 The concept of zombie firms originally argued by Hoshi (2006) and Caballero et al. (2008) (CHK hereafter) was defined as comprising such firms that cannot survive without financial support from lenders. However, the eventual bankruptcy of zombie firms was rare in reality. In this chapter, I reexamine why most alleged zombie firms finally recovered in Japan during the lost two decades following the framework of Fukuda and Nakamura (2011) and Nakamura and Fukuda (2013). The main result of the regression analyses suggests that the more transparent accounting rules and stricter bank supervision policies introduced at the beginning of the 2000 s markedly accelerated the recovery of alleged zombie firms by downsizing in terms of employees and/or fixed assets. It was too late to carry out constructive reforms since they had exhausted the positive legacies of the past. Although cost cutting was an effective way for a troubled firm to recover, it was considered to have a substantial deflationary impact on the macroeconomy.

The analyses presented in this chapter are developed on the basis of the joint works with Professor Shin-ichi Fukuda on the recovery of zombie firms and the lost two decades of the Japanese economy. I am deeply grateful to Professor Fukuda for permission to use the data and include some of the research outcomes. All remaining errors are my own. Any opinions, findings, or conclusions expressed in this chapter are those of the author and do not reflect the views of the Development Bank of Japan.