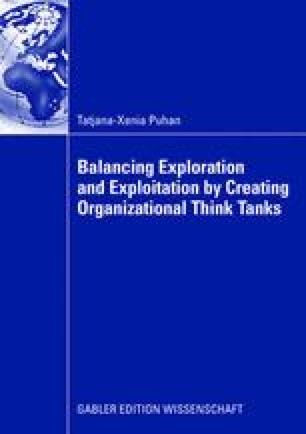 Shifting think tanks from the macro-to a meso-level

The problems that are caused by the exploration vs. exploitation trade-off for the innovation management of a firm were extensively discussed in the previous chapter. In addition, it was outlined that the implementation of interorganizational ambidextrous structures seems to have the potential to solve the trade-off in an efficient and effective way. This approach follows the idea to situate exploitation at the level of the individual partnering firms and merging (most of) the explorative activities of these firms in a central unit that acts as focal and mediating center of explorative excellence in an alliance between these firms. The design of this explorative unit is derived from political think tank concepts. Think tanks as private or public organizations that are non-profit oriented are usually a research subject of politically or sociologically interested scholars. Additionally it seems to be very difficult to define exact boundaries between what can be considered as a think tank or not. So without deep-diving into the political think tank theory, the first part of this chapter (3.1) introduces traditional and recent findings on what think tanks are and what role they play in a society; like this a basis is established on which the following considerations concerning organizational think tanks can be grounded. Furthermore it is argued and reasoned that think tanks are in fact agents in the mission of a phenomenon that could be called societal ambidexterity.

Open Innovation Network Member Explorative Activity Strategic Alliance Radical Innovation
These keywords were added by machine and not by the authors. This process is experimental and the keywords may be updated as the learning algorithm improves.
This is a preview of subscription content, log in to check access.