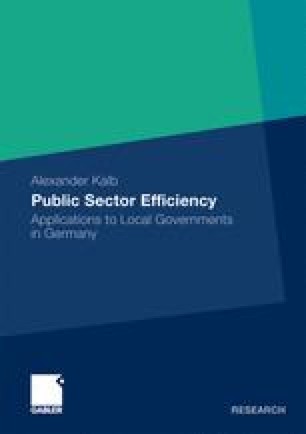 Introduction: Theme, Objectives and Structure of the Book

In recent years, public budgets in Germany have undergone a wave of consolidation. The current economic crisis, however, has put significant strain on government budgets - worldwide. Given the fact that in recent times, governments all around the world have spent huge amounts of money to alleviate the consequences of the economic crisis, the discussion about the sustainability of public finances will also be back on the agenda in Germany. The effects of the economic crisis, however, are unlikely to be limited to the national level. Indeed, the economic crisis will also put severe strain on the public finances of local governments. Usually, public budgets are consolidated either by cutting expenditures or by increasing income sources. But apart from the possibilities of cutting public spending by offering less public goods and services or by developing new sources of revenue (e.g. by levying new taxes or increasing current taxes), governments can also try to reduce public expenditures by operating more efficiently or, in other words, by producing a higher amount of public goods and services given a certain amount of (public) expenditures - provided that there is a potential to increase efficiency, of course.

Private Sector Local Government Public Sector Public Good Public Spending
These keywords were added by machine and not by the authors. This process is experimental and the keywords may be updated as the learning algorithm improves.
This is a preview of subscription content, log in to check access.

Cite this chapter as:
Kalb A. (2010) Introduction: Theme, Objectives and Structure of the Book. In: Public Sector Efficiency. Gabler