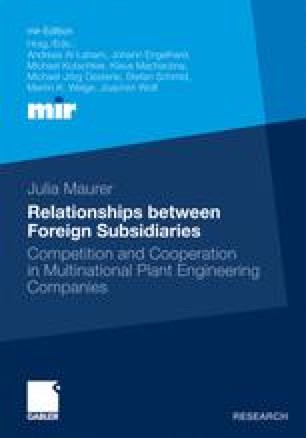 This research departed from the observation of a particular phenomenon: The (foreign) subsidiaries of MNCs in the plant engineering industry may not only cooperate but also compete with one another. An introductory case example served as a ‘teaser’ to investigate how and why MNCs operating in the same industry differ in terms of their intersubsidiary relationships. It was soon realized that the existing IB literature provides little insight into the horizontal relationships between MNC subsidiaries – the focus has always been more on the vertical relationship between headquarters and subsidiaries as well as on subsidiary roles. Significant groundwork was thus needed to allow for a systematic investigation of the phenomenon – both in terms of developing a conceptual framework for analyzing intersubsidiary relationships and in terms of identifying a suitable theoretical basis for explaining them. Eventually, a contingency approach was adopted, attributing different manifestations of intersubsidiary relationships to the MNC’s strategic orientation. In order to follow the call for more consideration of intersubsidiary relationships in empirical investigations (Ghoshal/Bartlett 1990: 620; Harzing/Noorderhaven 2006: 212), the theoretical framework was linked back to the specific industry and functional focus, i.e. project marketing of plant engineering companies. Case studies based on interviews in four leading large-scale plant engineering companies contributed to the ‘rich description’ of an under-researched phenomenon and confirmed that an MNC’s strategic orientation has a considerable impact on how subsidiaries compete and/or cooperate. Although findings need to be mirrored against industry particularities, they allow some transcending conclusions to be drawn.

Transaction Cost Economic Strategic Orientation Contingency Approach Plant Engineering Subsidiary Level
These keywords were added by machine and not by the authors. This process is experimental and the keywords may be updated as the learning algorithm improves.
This is a preview of subscription content, log in to check access.