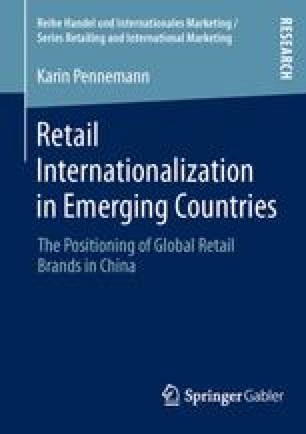 For over two decades, retail firms have aggressively internationalized, first into developed countries and then into developing countries, driven by opportunities, such as high growth rates, a growing middle-class, or the weakness of local retailers (Alexander, Rhodes and Myers 2007; Goldman 2001; Swoboda, Zentes and Elsner 2009). However, years after entering developing countries and adapting marketing offers based on local learning and knowledge about the local environment (an adaptation that even global firms make according to Jonsson and Foss 2011), foreign retailers can no longer rely on the weaknesses of local competitors because these local competitors have become more experienced and even internationalized.

Local Identity Brand Position Retail Sector Accessible Piece Local Competitor
These keywords were added by machine and not by the authors. This process is experimental and the keywords may be updated as the learning algorithm improves.

This study is an ealier version of the manuscript titled “The Effects of Perceived Brand Globalness and Perceived Brand Localness in China: Empirical Evidence on Western, Asian, and Domestic Retailers„ which is conditionally accepted for publication by the Journal of International Marketing.