Stable Homotopy Around the Arf-Kervaire Invariant 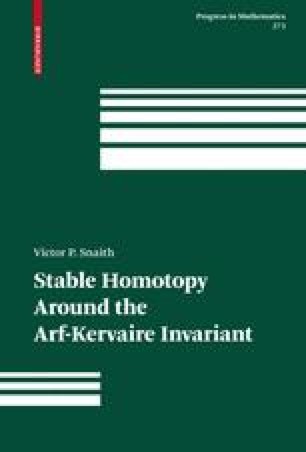 The objective of this chapter is to give a brief overview of some current themes and developments in stable homotopy theory. In the 1990’s a new stable homotopy category was designed by Vladimir Voevodsky in order to construct MGL, a new type of spectrum which Voevodsky used to prove a famous conjecture of John Milnor [191] concerning the norm residue map mod 2 on the Milnor K-groups of a field [180]. In § 1 I shall sketch the construction of this new type of stable homotopy category. In § 2 I shall sketch some spectral constructions which are possible in \( \mathbb{A} \)1-stable homotopy theory which imitate the classical construction which I made in [245], [246] and [249] as part of my premature attempt to construct algebraic cobordism. Conjectures due to David Gepner and me, which are given in §9.2.15, predict that these spectra are equivalent to algebraic K-theory and (the periodic version of) MGL, by analogy with Chapter 1, Theorem 8.3.3. In Example 9.2.15(ii) I have given the proof of my original result which we are convinced goes through mutatis mutandis in the \( \mathbb{A} \)1-stable homotopy category. § 2 concludes with a paragraph concerning other recent, related stable homotopy theory developments.