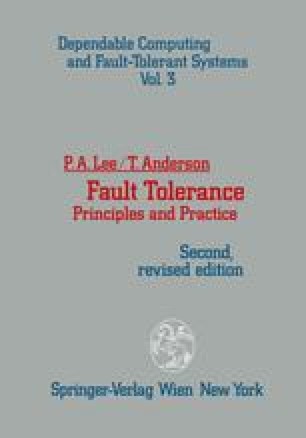 By means of techniques for error detection, damage assessment and error recovery a fault tolerant system aims to ensure that any errors introduced into the system state are removed. If these techniques succeed in placing the system in an error free state, the system can return to normal operation since the immediate danger of failure has been averted. However, this may not be enough to ensure reliability. Measures and mechanisms employed in the first three phases of fault tolerance are (necessarily) concerned with errors in the system, but errors are merely the symptoms produced by a fault; techniques which cope with errors, such as those described in the previous chapter, leave the fault which produced those errors untreated. Given that a fault has already inflicted damage on the system state there is clearly a possibility that the fault will continue to produce errors. Repeated manifestations of a fault can force a system to fail despite the efforts of the fault tolerance techniques described so far, either because the consequences of the fault become more and more serious, or because the system is so heavily engaged in coping with recurring errors that it fails to maintain its specified service.

Fault Tolerance Fault Location Fault Treatment Design Fault Transient Fault
These keywords were added by machine and not by the authors. This process is experimental and the keywords may be updated as the learning algorithm improves.
This is a preview of subscription content, log in to check access.