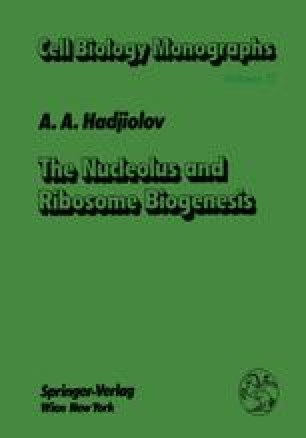 The Nucleolus and Ribosome Biogenesis pp 1-4 | Cite as

The nucleolus is an intranuclear organelle that has attracted the attention and imagination of scientists for a little over two centuries. Its first description in 1781 is attributed to Fontana (see Miller 1981) and since then many cytologists have contributed findings to establish that the nucleolus is ubiquitous in eukaryotic cells. However, the early descriptive work did not go far beyond establishing the existence of variations in the number, size, and shape of nucleoli in various plant and animal cells. It is only 50 years ago that the next step was made when Heitz (1931, 1933) and Mcclintock (1934), followed by many cytologists and cytogeneticists, firmly established that the nucleolus is related to “nucleolus Organizers” in some chromosomes and is therefore the likely structural expression of chromosomal activity. The next step was due largely to the cytochemical work of Caspersson and Brächet, who showed in the 1940’s that the nucleolus contains RNA, related in some hypothetical way to cytoplasmic RNA, particularly abundant in cells actively engaged in protein synthesis (see Caspersson 1950, Brächet 1957). These findings placed the nucleolus in a prominent position for those trying to understand the then intriguing relationship between DNA, RNA, and protein. This was the reason why many cytochemists and electron microscopists of the 1950’s, perfecting continuously the ultrastructural analysis of cellular organelles, devoted their skills to the structure of the nucleolus in a broad variety of eukaryotic cells studied under different physiological and pathological conditions (see Bernhard 1966, Bernhard and Granboulan 1968, Busch and Smetana 1970).