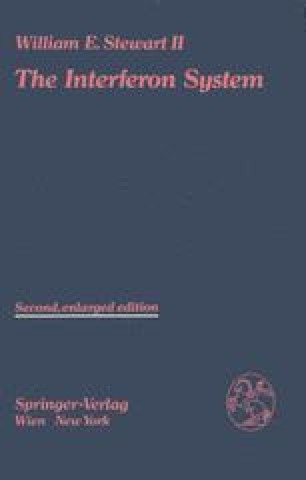 Antitumor Activities of Interferons in Animals

In view of the pleiotypic alterations induced in cells by interferons and the multifaceted modulations of host defenses, it would really be surprising if interferon were inactive against tumors. This action could be mediated by its antiviral activity, its cell-multiplication-inhibitory activity or its immunomodulatory actions. But, in fact, the antitumor activities of interferon preparations were described several years before it became accepted that this represented more than merely a measure of its antiviral activity. And, again, when this argument was unconvincing, it was assumed that the impurities in the interferon preparations employed accounted for antitumor actions. Now it is clear that interferons are able to induce antitumor activities in many animals with many types of tumors (Table 17). In this Section these tumor system studies with interferons and its inducers are described and proposed mechanisms of antitumor activities are discussed.

Antitumor Activity West Nile Virus Interferon Treatment Murine Sarcoma Friend Virus
These keywords were added by machine and not by the authors. This process is experimental and the keywords may be updated as the learning algorithm improves.
This is a preview of subscription content, log in to check access.