Manipulation and Control of Jets in Crossflow 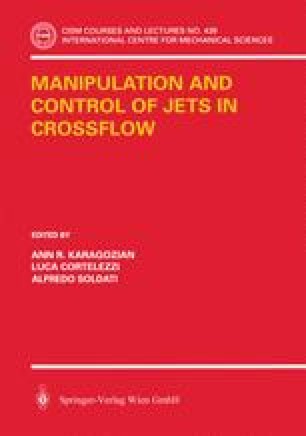 Particle-laden gas jets with Reynolds number of order 20000 were forced at fixed frequencies in order to excite periodic vortex ring structures. Particle-to-air mass loading ratio was varied from 4% to 50%, and the flow behavior was documented by flow visualization, number density measurements, and particle and gas velocity measurements. The experiments showed that a Stokes number based on particle inertial and vortex time scales was important in determining the degree of particle clustering and the rate of particle dispersion in free jets. The same Stokes number determined the degree of lag occurring between particles and vortices in the stagnation zone of impinging jets. Vortex rings were found to persist in the free jet when the mass loading ratio was increased to 50%. However, PIV measurements demonstrated that downstream of the stagnation zone in impinging jets, vortices were weakened by mass loading ratios of only 4%.

Vortex Ring Nozzle Exit Slip Velocity Vortex Core Strouhal Number
These keywords were added by machine and not by the authors. This process is experimental and the keywords may be updated as the learning algorithm improves.

The ideas and support of Professor John Eaton in initiating and carrying out the free jet experiments at Stanford University are gratefully acknowledged. In addition, the authors thank Sanjay Pahuja who developed the phase separation software employed in the flow modification studies. The work was supported by the Electric Power Research Institute (RP-2154-10 and RP-8034-01) and the National Science Foundation (CTS-9457014).