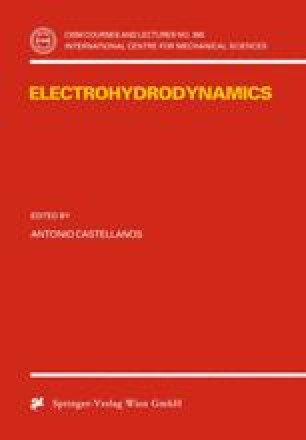 Electrohydrodynamic processes can play a major role in ionic transport phenomena in liquids. Effects of this type were first studied by Avsec and Luntz [1] and later by Steutzer [2] who was interested in developing a dielectric pump. Ostroumov [3] seems to have been the first to analyze conduction processes in ionic liquids in the light of convective effects. Evidence of convective instabilities can be seen in the work of Watson, Schneider and Till [4] on electron-beam charged liquids; in these studies an electron beam was used to inject charge into the free surface of a thin film of liquid and the surface potential of the sample was measured as a function of the injected current. The results indicate that for sufficiently high current densities the liquid becomes EHD unstable and convection-enhanced conduction occurs. These experiments will be discussed below. Felici, Atten and their co-workers at CNRS, Grenoble [5–7] have investigated EHD phenomena over the past 30 years or so, and they have made extensive use of ion-exchange membranes as injecting electrodes into polar dielectrics such as nitrobenzene. By means of the Kerr electroptical effect they have been able to observe field distortion due to the charge injection process and to keep track of the resulting EHD effects.

Space Charge Rayleigh Number Surface Potential Convective Instability Critical Rayleigh Number
These keywords were added by machine and not by the authors. This process is experimental and the keywords may be updated as the learning algorithm improves.
This is a preview of subscription content, log in to check access.