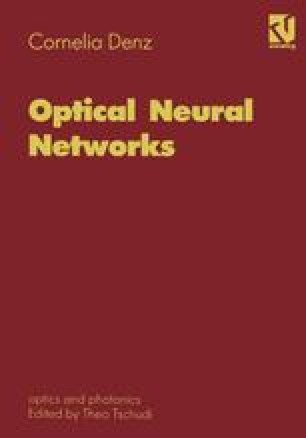 When I began to develop the idea of that book in 1993, nonlinear optical realizations of neural networks were just at a beginning state, having produced several interesting and promising, but not fully mature systems. Now, a couple of years later, optical implementations of neural networks have spread out in a lot a research laboratories, optimizations of the first models are investigated in different countries and I do not exaggerate if I state that the development of optical neural networks has not yet reached its maximum.

Neural Network Select Paper Optical Interconnection Optical Data Storage Optical Implementation
These keywords were added by machine and not by the authors. This process is experimental and the keywords may be updated as the learning algorithm improves.
This is a preview of subscription content, log in to check access.