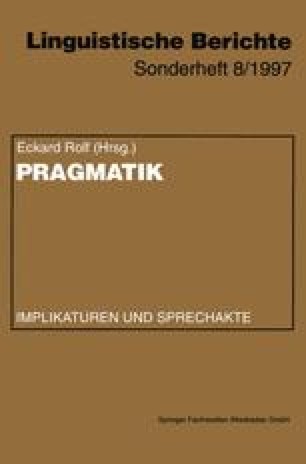 In the past decades, there has been much progress in the formal Semantics of ordinary language. Logicians, linguists and philosophers have extensively used logical formalisms in order to interpret directly or after translation important fragments of actual natural languages. They have thereby contributed to the foundations of the theory of sentence meaning. In formal Semantics, speaker meaning is reduced to sentence meaning: one assumes that speakers only mean what they say. Thus, formal semantics is a theory of literal meaning. However, in ordinary conversations, the speaker’s meaning is often different from the sentence meaning. First, the primary illocutionary act that the speaker attempts to perform is different from the literal speech act expressed by the uttered sentence in the cases of metaphor, irony and indirect speech acts. Whenever the speaker indirectly requests the hearer to pass the salt by asking “Can you pass the salt?”, the primary speech act of the utterance is the indirect request and not the literal question about the hearer’s abilities. Second, the speaker means to perform secondary non literal illocutionary acts in the cases of conversational implicatures. By saying “If you are nice, I will give you something” the speaker can imply conversationally that he will not give anything to the hearer if he is not nice. In such a case, he makes a secondary non literal assertion in addition to the primary conditional promise. The speaker’s capacity to make and understand non literal speech acts is clearly part of his linguistic competence. But it exceeds the capacity of understanding the sentence meaning.

I am grateful to Steven Davis, François Lepage, Kenneth Mac Queen, Claude Panaccio, John Searle and Dietmar Zaefferer for helpful comments on a first draft of this paper.