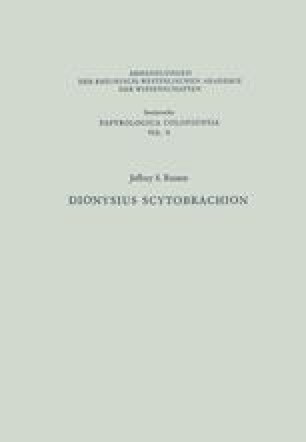 As new fragments of the Argonauts, the three papyri examined in Part I are relatively unimportant; they serve mainly to confirm what was already known of the story from Diodorus. It is rather as new testimonia on Dionysius himself (P. Mich. 1316 and P. Oxy. 2812 through their citations, P. Hibeh 2.186 through its date) that they are of value, and it seems worthwhile to examine anew all the hitherto known testimonia in the light of this new evidence, in an attempt to resolve several basic questions: where Dionysius was born (for two different ethnics are given him in the sources), which works he composed, and when he lived. If the testimonia appear at times irreconcilable, it goes without saying that only with an awareness of their natures, i.e., what we may plausibly deduce from them, and of the reliability of each witness (measured by the extent to which they are based on a knowledge of Dionysius’ works themselves) can we hope to discover the truth.