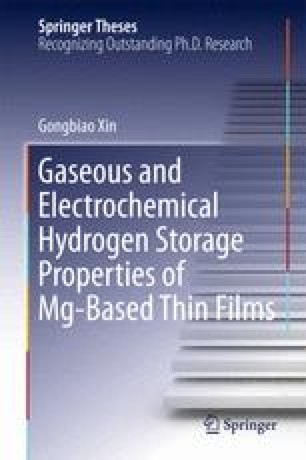 Mg-based thin films used in this study were prepared by a custom-designed direct current (DC) magnetron sputtering system with a background pressure of around 2 × 10−4 Pa. Glass sheets and silicon wafers were chosen as the substrates. The films prepared on glass substrates were used for the electric, optical, and electrochemical measurements, and the films prepared on silicon substrates were used for the structural characterizations, such as XRD and SEM. Before sputtering, the glass and silicon substrates were cleaned with deionized water, acetone, and absolute ethyl alcohol for 15 min, respectively. The magnetron discharges were generated under an argon pressure of 0.6 Pa with the argon flow rate of 76 sccm. The purity of argon pressure is 99.99 %. The overall purity of Mg, Ti, Al, and Pd is 99.99 %. After Mg film deposition, 10 nm Pd cap layer was deposited on the top, which is necessary to protect.

Desorption Process Argon Pressure Argon Flow Rate Magnification Time Absolute Ethyl Alcohol
These keywords were added by machine and not by the authors. This process is experimental and the keywords may be updated as the learning algorithm improves.
This is a preview of subscription content, log in to check access.