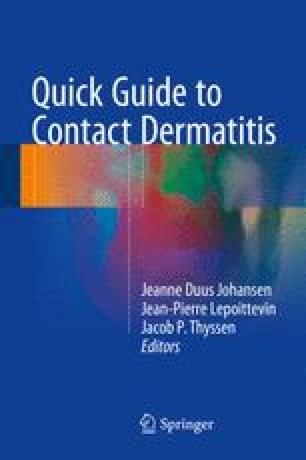 Overview of Allergens Present in the European, North American, and Chinese Baseline Series

This chapter has been written in order to familiarize the reader with the structure of the main chemicals involved in contact dermatitis and therefore included in the European Baseline Series (EBS), the North American Core Series (NACS), and the Chinese Baseline Series (CBS). For each chemical, the principal name is used for classification, but also listed are the most important synonym(s), the Chemical Abstracts Service (CAS) Registry Number that characterizes the substance, and its chemical structure. The reader will also find one literature reference. For botanical natural mixtures, only the main chemicals that have been shown, or suspected, to be associated with skin allergy are listed, and the reader should never forget that some other minor chemicals could also be relevant to some patients.