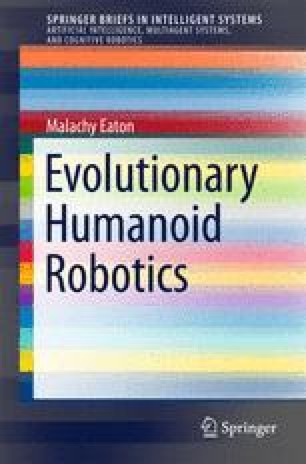 The State of the Art in EHR

It is now over half a decade since my initial short survey of the EHR field entitled “Evolutionary Humanoid Robotics—Past, Present and Future” was published in the book 50 Years of Artificial Intelligence: Essays Dedicated to the 50th Anniversary of Artificial Intelligence (Lungarella et al. 2007). As its name suggests, this was a publication designed to mark the 50th anniversary of the formal inception of the field of artificial intelligence as a separate research domain, with its own distinct attributes; although there are those who would argue that over half a decade earlier the British scientist Alan Turing was the main protagonist and instigator of this field.

Humanoid Robot Biped Robot Real Robot Zero Moment Point Bipedal Locomotion
These keywords were added by machine and not by the authors. This process is experimental and the keywords may be updated as the learning algorithm improves.
This is a preview of subscription content, log in to check access.