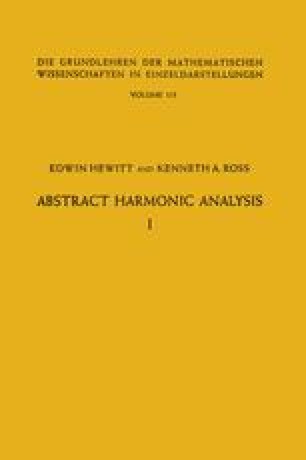 This chapter is devoted to what might be called the “fine structure” of locally compact Abelian groups. We will obtain extremely detailed information about the structure of these groups. The basic tool in this program is the character group, which is defined and studied in §23. The character group is important in large measure because of the Pontryagin-van Kampen duality theorem, which is stated, proved, and utilized in §24. In §25, we apply the duality theorem to study a number of special locally compact Abelian groups, and in §26 we apply it to certain problems in structure theory and analysis.

Abelian Group Duality Theorem Continuous Character Character Group Cardinal Number
These keywords were added by machine and not by the authors. This process is experimental and the keywords may be updated as the learning algorithm improves.
This is a preview of subscription content, log in to check access.