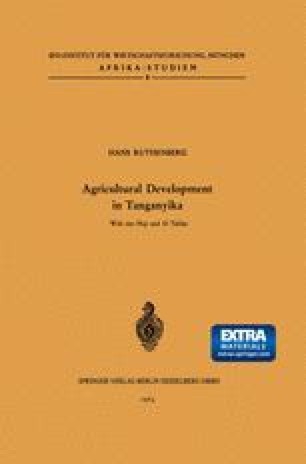 Economic activity characterized the final decade of British administration more so than its earlier years. The change in political status which followed World War I undoubtedly had negative effects on Tanganyika’s agricultural development, both in the sphere of the estate economy and of peasant farms. In the last decade of the German colonial administration the viewpoint had gained increasing support that estates alone could not achieve the desired production, that the conditions were unsuitable for settling German farmers on family holdings and that therefore African farms were to be encouraged. Since the turn of the century1 the influential Cotton Committee, for example, supported the introduction of cotton cultivations as “a peoples crop”. A report from as early as 1907 states:

“The cultivation of cotton by the Africans... is experiencing continuous development. In many parts of the colony the Africans have already recognized the advantages of this crop, and one may assume that with further encouragement cotton planting will become a permanent practice.”