Angiography of the Mesencephalon 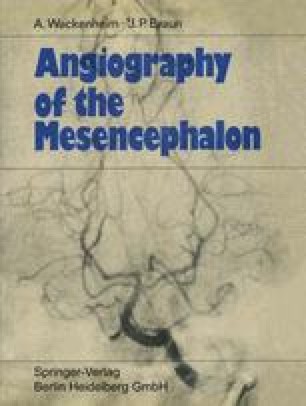 Angiography of the Mesencephalon pp 17-33 | Cite as

The posterior cerebral artery is the terminal branch of the basilar artery. It winds around the cerebral peduncle forming a curve whose shape is rather variable. The two posterior cerebral arteries fix the boundaries of the brain stem in an oblique direction upwards and backwards. In this fashion they course into the ambiens cistern on the internal concavity of the temporal lobe parallel to the basal vein. Consequently they are in direct contact with the hippocampus and the internal gyri of the temporal lobe. One can make out segment P1, or precommunicating one, a short trunk which measures 0,5 to 1 cm in length. The posterior thalamo-perforating arteries arise in this segment. Segment P2, or post-communicating one, corresponds to the upper and lateral peduncular portion as far as the region above the quadrigeminal body where the left and right arteries converge. Segments P3 and P4 concern the temporo-occipital area, lying outside the mesencephalon, object of our study. Very often segment P2 describes a small concave curve towards the exterior at the level of the lateral mesencephalic sulcus. The minimal distance between the two arteries at the end of segment P2 corresponds on the one hand to the quadrigeminal cistern and on the other hand to the free edge of the tentorium. In principle, the frontal distance between the posterior cerebral arteries gives the width of the brain stem. However, this notion is not always valid since it is of no great importance in diagnosing a peduncular atrophy. Such an atrophy easily occurs without shifting of the posterior cerebral artery. We frequently view quite normal arteriograms in severe cases of peduncular atrophy (Fig. 7).