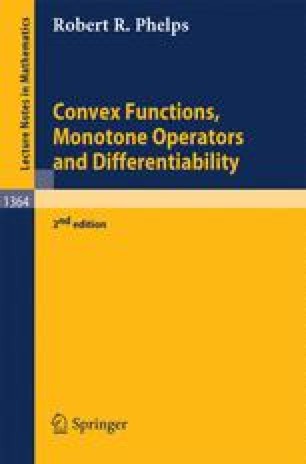 The material in this introductory section is classical; it provides the background about convex functions and their derivatives needed for the remainder of the notes. Flett’s book [Fl] is frequently useful when one needs to verify fundamental questions concerning differentiability and Roberts-Varberg [R-V] is a good source for basic elementary facts about convex functions. Rademacher’s theorem (stated as Theorem 1.18) has been extended in various ways to infinite dimensional spaces. The first requirement is to come up with a reasonable definition of “almost everywhere” (that is, of some notion of “measure zero”) for infinite dimensional spaces, where no countably additive measure with decent properties can exist. Once this is done, theorems can be proved which assert that a locally Lipschitzian map from a separable Banach space into a space with the RNP (see Section 5) must be Gateaux differentiable almost everywhere. It has been known for at least thirty years that no such theorem holds for Fréchet differentiability; there exist simple locally Lipschitzian maps of separable Hilbert space into itself which are nowhere Fréchet differentiable. There are even several examples (with subsequent citations) which purport to exhibit real-valued locally Lipschitzian functions on Hilbert space which are nowhere Fréchet differentiable. In preparing our UCL notes, we found all such examples to be flawed, leaving the obvious question as to whether such functions on Hilbert space must be Fréchet differentiable in a dense set, say. (Rademacher’s theorem shows that Gateaux differentiability must take place in a dense set, but examples on the real line show that it is too much to demand that the set be a Gδ.) This problem was solved beautifully by D. Preiss [Pr], as stated in Theorem 4.12.

Banach Lattice Separable Banach Space Infinite Dimensional Space Asplund Space Continuous Convex Function
These keywords were added by machine and not by the authors. This process is experimental and the keywords may be updated as the learning algorithm improves.
This is a preview of subscription content, log in to check access.