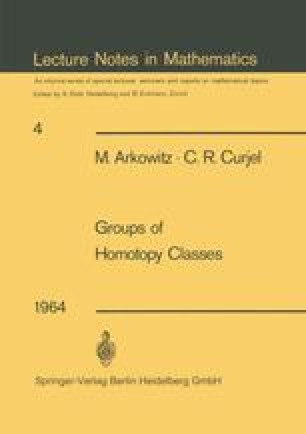 Many of the sets that one encounters in homotopy classification problems have a natural group structure. Among these are the groups [A,ΩX] of homotopy classes of maps of a space A into a loop-space ΩX. Other examples are furnished by the groups ξ(Y) of homotopy classes of homotopy equivalences of a space Y with itself. The groups [A,ΩX] and ξ(Y) are not necessarily abelian. It is our purpose to study these groups using a numerical invariant which can be defined for any group. This invariant, called the rank of a group, is a generalisation of the rank of a finitely generated abelian group. It tells whether or not the groups considered are finite and serves to distinguish two infinite groups. We express the rank of subgroups of [A,ΩX] and of ξ(Y) in terms of rational homology and homotopy invariants. The formulas which we obtain enable us to compute the rank in a large number of concrete cases. As the main application we establish several results on commutativity and homotopy-commutativity of H-spaces.

Homotopy Class Betti Number Homotopy Type Homotopy Group Concrete Case
These keywords were added by machine and not by the authors. This process is experimental and the keywords may be updated as the learning algorithm improves.
This is a preview of subscription content, log in to check access.