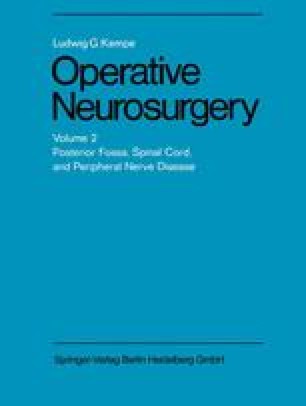 Aneurysms of the Vertebral Artery

The first aneurysm in the posterior fossa successfully operated upon at Walter Reed General Hospital was in 19471. This aneurysm arose from the posterior inferior cerebellar artery. Since that time there have been four intracranial vertebral artery aneurysms. The origin of these aneurysms is often near the site where the vertebral artery passes through the dura. In fact, in two of our patients the aneurysms arose precisely as the vertebral artery passes intrathecally. This necessitates opening the dura to the base of the aneurysm so that the neck can be isolated. These aneurysms sometimes lie beneath the highest denticulate ligament which has to be transected to expose the lesion. These lesions do not have to rupture to cause symptoms. Aneurysms pointing rostrally along the lateral medullary cistern may cause irritative symptoms in the glossopharyngeal nerve (Fig. 79).

Vertebral Artery Posterior Fossa Posterior Inferior Cerebellar Artery Irritative Symptom Left Vertebral Artery
These keywords were added by machine and not by the authors. This process is experimental and the keywords may be updated as the learning algorithm improves.
This is a preview of subscription content, log in to check access.