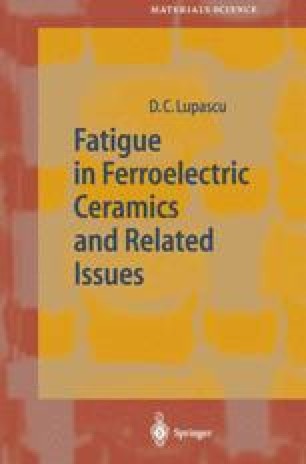 The present chapter is essentially the discussion of the multiple factors influencing fatigue in ceramic ferroelectrics. It is thus in large parts also a review of relevant literature. The intention is to provide more than just a mere presentation of a single model, but the attempt to correlate the vast body of knowledge on particular aspects of fatigue to the relevant mechanisms.

Oxygen Vacancy Domain Wall External Field Dislocation Loop Coercive Field
These keywords were added by machine and not by the authors. This process is experimental and the keywords may be updated as the learning algorithm improves.
This is a preview of subscription content, log in to check access.