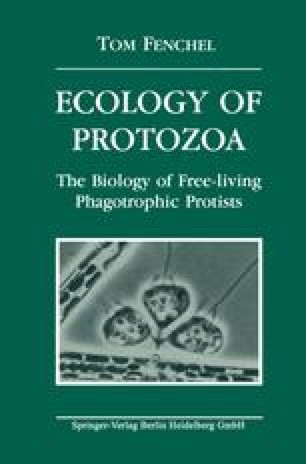 Comparisons between marine and limnic (or freshwater) faunas show large differences with respect to the taxonomic groups represented. Also when related forms are found they often fill different ecological niches in the two types of environment. In the sea, insects, leeches, pulmonate snails, and cladocerans are either completely absent or quantitatively unimportant, filling only specialized or marginal niches. Conversely, corals, tunicates, echinoderms, and other important groups of invertebrates are entirely absent from freshwater. With regard to protozoan communities, differences between limnic and marine habitats are less dramatic.

Activate Sludge Freshwater Habitat Heterotrophic Flagellate Summer Stratification Protozoan Community
These keywords were added by machine and not by the authors. This process is experimental and the keywords may be updated as the learning algorithm improves.
This is a preview of subscription content, log in to check access.