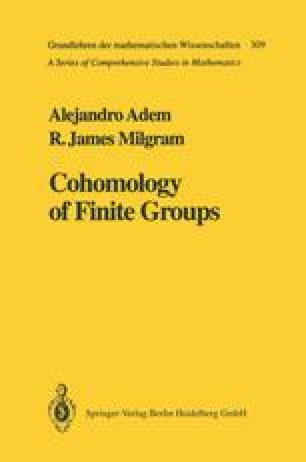 This book deals with the cohomology of groups, particularly finite ones. Historically, the subject has been one of significant interaction between algebra and topology and has directly led to the creation of such important areas of mathematics as homological algebra and algebraic üT-theory. It arose primarily in the 1920’s and 1930’s independently in number theory and topology. In topology the main focus was on the work of H. Hopf, but B. Eckmann, S. Eilenberg, and S. MacLane (among others) made significant contributions. The main thrust of the early work here was to try to understand the meanings of the low dimensional homology groups of a space X”. For example, if the universal cover of X was three connected, it was known that H 2(X; A) depends only on the fundamental group of X. Group cohomology initially appeared to explain this dependence.

Finite Group Group Cohomology Homotopy Theory Cohomology Ring Homological Algebra
These keywords were added by machine and not by the authors. This process is experimental and the keywords may be updated as the learning algorithm improves.
This is a preview of subscription content, log in to check access.