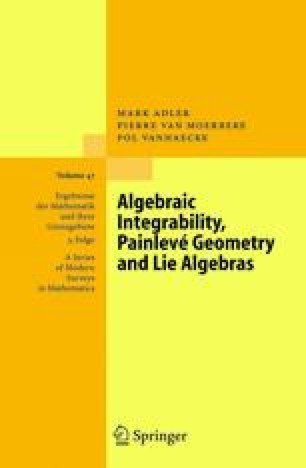 In the late 60’s and 70’s a remarkable renaissance occurred around an equation, discovered in 1895 by Korteweg and de Vries, describing the evolution over time of a shallow water wave. This equation has its roots in Scott Russel’s horseback journey along the Edinburgh to Glasgow canal; he followed a wave created by the prow of a boat, which stubbornly refused to change its shape over miles. This revival in the 60’s was driven by a discovery of Kruskal and coworkers: the scattering data for the one-dimensional Schrödinger operator, with potential given by the solution of the KdV equation, moves in a remarkably simple way over time, while the spectrum is stubbornly preserved in time. This led to a Lax pair representation involving a fractional power of the Schrödinger operator; it ties in with later developments around coadjoint orbits in the algebra of pseudo-differential operators. Very soon it was realized that this isolated example of a “soliton equation” had many striking properties, leading to an explosion of ideas, following each other at a rapid pace.

Invariant Manifold Abelian Variety Rigid Body Motion Coadjoint Orbit Shallow Water Wave
These keywords were added by machine and not by the authors. This process is experimental and the keywords may be updated as the learning algorithm improves.
This is a preview of subscription content, log in to check access.